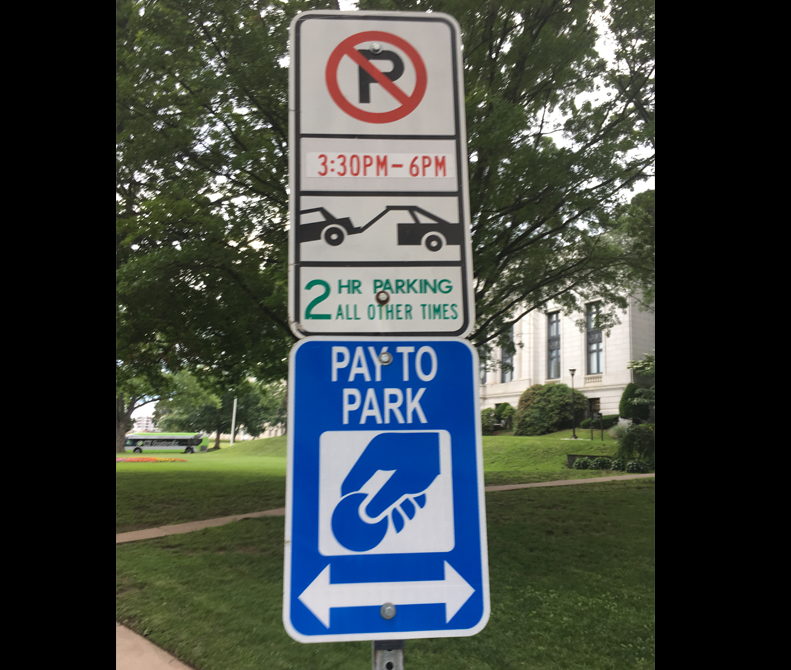 When the Declaration of Independence was signed in July, 1776, it stated in part:

“[T]hat all men are created equal, that they are endowed by their Creator with certain unalienable rights, that among these are life, liberty and the pursuit of happiness. That to secure these rights, governments are instituted among men, deriving their just powers from the consent of the governed. (emphasis added). The citizen is sovereign. The state works for the people and not the other way around.

Article 1 Section 2 of the Connecticut Constitution state emphatically that: “ [a]ll political power is inherent in the people, and all free governments are founded on their authority, and instituted for their benefit . . . .” (emphasis added.)

This parking sign is located on Oak Street in the Hartford Capitol district. Many of them are littered about the Capitol ordering the lowly burger to get off the street before the mighty descend in their chariots to go home.

After handicapped parking, clearly the best parking at any state building should go to the citizen who is coming to do business with the state. You are more likely to find preferred parking for the bosses and their assistants; then the staff and lastly, the citizen. And when the citizen parks, the citizen may or may not have to pay toll. This is upside down and reflects the order of priorities of The Hartford Club.

Please appreciate that whenever a citizen is coming to the Capitol, it is to do business with the state. The state works for the citizen. In the same Declaration of Independence, the drafters recounted their failed efforts to petition King George:

“In every stage of these oppressions, we have petitioned for redress in the most humble terms: our repeated petitions have been answered only by repeated injury. A prince, whose character is thus marked by every act which may define a tyrant, is unfit to be the ruler of a free people.” The First Amendment of the U.S. Constitution assures us of “the right of the people peaceably to assemble, and to petition the government for a redress of grievances.” Our own Constitution affirms in Article 1, Section 14, “[t]he citizens have a right, in a peaceable manner . . .to apply to those invested with the powers of government, for redress of grievances, or other proper purposes, by petition, address or remonstrance.” The point is that when the citizen speaks, the state must listen. As a gifted attorney once said, every time a criminal defendant gets up to address the court, it is, in effect, a petition for redress of grievances. It does not mean that the citizen is right every time, it means the citizen is due the respect of a sovereign when juxtaposed to the state.

To further understand the pathology of this series of signs, one should consider that normal working hours are 9-5 pm. These hours may be adjusted perhaps to create certain efficiencies. It is conceivable that one state office building might let out at 4:30 pm; another one at 4:45 pm; and, yet another one at 5:00 pm. That the state worker, who is nice and well-meaning, may be inconvenienced by a slight traffic delay to get to I-91 or I-84 pales in comparison to the citizen who has business with the state.

At considerable expense of state and federal money there are express access points to I-91 at Pulaski Circle and to I-84 at Capitol Avenue.  The problem is that nobody has been there to raise his or her hand to represent the citizen. Why a citizen has to pay to park to visit a government agency is a stretch already. To then make it punishable not just by a ticket but by towing between 3:30 to 6 pm is highly obnoxious. Imagine you come at 2:30 pm to do business or to visit a legislator and you have less than one hour to do your business? You can’t even stay until 4:30 or 5 pm to deal with the government. The state will tow your car and issue you a ticket. Who’s idea was this?

There, in a street sign, is the contempt The Hartford Club has for you the citizen.