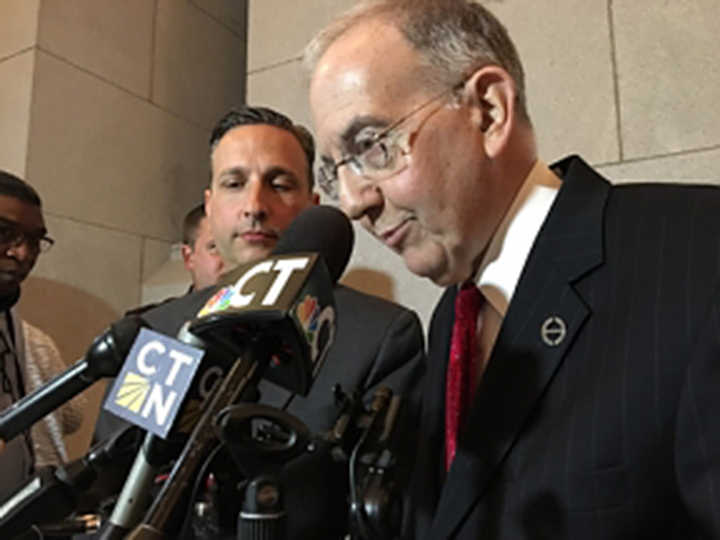 Is 2017 Labor Agreement Constitutional or a Bridge Too Far?

Connecticut has the highest per capita income in the nation, but has managed to be scored at the 47th worst fiscal health of the fifty states. That is not an easy task to accomplish, but here we are. One of the more significant challenges for our state is honoring the commitments made to public union retirees as well as to present state employees who have vested retirement benefits. We have an obligation to honor these commitments.

We also have an obligation to our children. What can we afford for present and future state employees? How can we make Connecticut more competitive as a place to do business; a place where we want to stay and prosper; a place where people want to raise their families; and, a place where retirees want to enjoy their golden years with friends and family?

On July 31, 2017, Lieutenant Governor Nancy Wyman cast the tie-breaking vote on a state employee labor concession package.  This new contract is projected to “save” $1.5 billion over a two-year budget period and covers more than 30 public unions, which represent our kind and well-meaning state workers. With this “saving” came a four-year period of no layoffs and an extension of existing union contracts until 2027. That sounds like a long time to the layman as well as to attorneys.

Senator Martin Looney, the top Democrat in the Senate, was quoted as saying: “We’re going to respect our workers and their right to collectively bargain and this is a reasonable negotiation, and reasonable result both for the state and its unionized workers.”

The actual standard of whether something qualifies as “good government” was put forward by James Madison in Federalist paper 62:

“A good government implies two things: first, fidelity to the object of government, which is the happiness of the people:

secondly, a knowledge of the means by which that object can be best attained.” An irrevocable, ten-year contract is not good government.

We have our state constitution to “define, secure, and perpetuate the liberties, rights and privileges which [the people] have derived from their ancestors . . .” Preamble to the Connecticut Constitution. “That the great and essential principles of liberty and free government may be recognized and established.” Art. 1.

Putting a four-year fence around the public unions of no layoffs and increases in pay plus locking in the employment terms for ten years until 2027 favors The Hartford Club. It does not advance the happiness of the people. Could that have been a bridge too far? If ten years is okay, why not twenty? Do the proponents maintain that they have created a Super State within the state?

How does this square with our Constitution? First we come to

Art. 1, sec. 1:  Where “no set of men [or women] are entitled to exclusive public cmoluments or privileges from the community.” (Profit arising from office, employment or labor). Is a ten-year agreement a public emolument?

Our government is divided into the legislative, executive and judicial branches. Article 2.

Our government can pass a law by a simple majority vote of the general assembly and senate followed by the governor’s signature. Art. 4, sec. 15. This implies that the same law could be overturned or amended the following year by a simple majority. If the governor does not sign what the legislature has passed, the general assembly and the senate can override that veto by two-thirds majority. Art. 4, Sec. 15. And in the same fashion a law can be undone the following year.

Our Constitution can be amended by three-quarters vote of the general assembly and senate, which would then submit the issue to a majority referendum of the citizens. Art. 12.

The general assembly may even call for a constitutional convention by two-thirds vote of each house, provided one has not occurred in the previous ten years. Art. 13.

So there are numerous ways to pass laws and amend them annually and there are even ways to amend our Constitution from time to time, but we are led to believe that the labor agreement passed at the end of July, 2017, cannot be amended or altered for ten years? Does this not appear to be a Super State within the state? How can our Constitution provide for a method by which our laws can be changed and our Constitution can be amended but the labor agreement from this summer is inviolate for ten years? You do not have to be an attorney to ask whether this is a bridge too far?

It is in fact ultra vires and void ab initio. The legislature and governor can vest no more power into their actions than that granted by our state constitution. You may recall some lessons from your middle school, civic’s lessons. We instituted a limited government for the people and by the people. The government can only do what we have authorized it to do. All powers not granted to the government are retained by the people. Therefore, if a state union contract is approved by a simple majority of the legislature and signed by the governor, that same contract can be voided by a simple majority of the legislature and signature of the governor one month later. The ink in the governor’s pen does not have some extra strength to put such a contract out of reach of reversal by the same steps as it was enacted. While it is reasonable for the legislature to make a contract for one bridge or one road, which is enforceable, you cannot take thirty-five percent (35%) of the budget and put it off-limits for the legislature and governor for four, ten or twenty years. If thirty-five percent is okay, why not sixty five percent? It is a bridge too far.

Respectfully submitted for consideration by my fellow citizens.